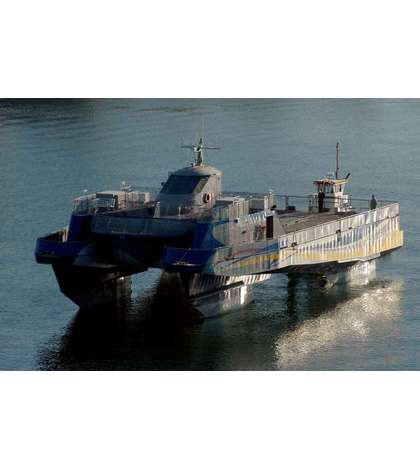 This is the Sea Slice, a Littoral Combat Ship (LCS), and the coolest craft a civilian can buy. No one else in Monaco, or even Lake Havasu will have one. For a craft that cost $15 million in the late 90s, it’s a steal.

When Lockheed Martin (of SR-71 Blackbird fame) finished designing and building, the US Navy launched the Sea Slice in 1996, built to dart around lakes and near-shore water bodies.

The design is a descendent of the small waterplane area twin hull (SWATH) class of ship. Regular SWATHs have two cylindrical pontoons for hulls, both of which sit below the water’s surface. That way, it avoids the speed- and stability-sapping waves on the surface. The Sea Slice here has four shortened teardrop-shaped hulls in total — two on each side, in lines behind each other. That design reduces drag even more, and reduces the wake.

To get the 190-ton craft moving at a manufacturer’s claimed top speed of 35 mph, the Sea Slice has two MTU diesel engines and two 180-kW Caterpillar generators that give it 6,964 horsepower. Its fuel tanks hold 11,112 gallons — at a little over $2.30 a gallon for diesel, that’s about $25,500 for a fill-up. That’ll sting, but think of how much you’re already saving off the sticker price.

There’s plenty of space. The five cabins can be set up for sleeping, and the vessel can accommodate 149 guests. For civilian comforts, there are two 400-gallon fresh water tanks to supply the bathroom with a shower, and the washing machine.