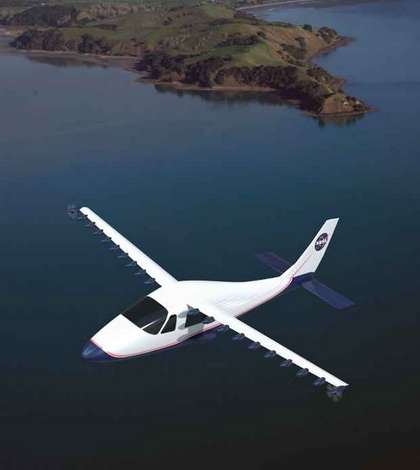 NASA’s set to test a wing concept it says «may herald (the) future» of electric planes, but it almost looks like a joke — it has one-third the wing area of a normal aircraft and 18 electric motors. However, the space agency is dead serious about the LEAPTech wing, a joint partnership with two private aerospace companies. It consists of a 31-foot, carbon composite span with tiny motors powered by lithium iron phosphate batteries. After successful testing at slower speeds, NASA will «fly» a wing section aboard a specially-equipped truck at speeds up to 70mph. Eventually, the wing will be mounted to a commercial Tecnam P2006T aircraft and flown by test pilots. So, what’s up with the crazy LEAPTech wing? According to inventor Joby Aviation, the thrust from all the motors and props increases the air velocity over the wing uniformly, drastically boosting lift. Each motor is independently controlled by a computer, allowing engineers to tailor speeds for optimal performance. All of that allows for a much smaller wing with reduced drag, which in turn delivers higher efficiency, faster speeds, a smoother ride and a lower noise signature. At the same time, a LEAPTech aircraft takes off and lands at the same speeds and distances as a normal plane. The concept is part of NASA’s plan to transition aircraft to electric propulsion within the next ten years. NASA said the technology «has the potential to achieve transformational capabilities in the near-term for (private) aircraft, as well as for transport aircraft in the longer-term.» That said, electric planes suffer from the same range issues as electric cars, and NASA’s wing doesn’t look like it would fly at all without power. The space agency will no doubt have to thoroughly prove the LEAPTech wing concept before sending up test pilots — it just looks wrong.