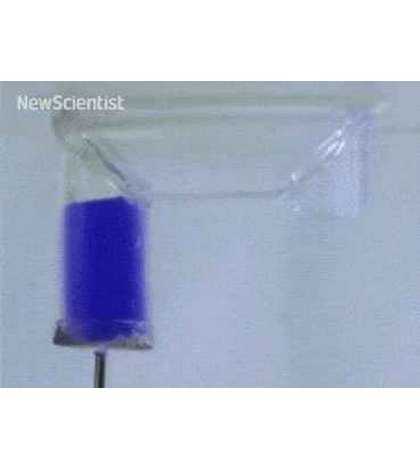 Carrying liquids up a hill usually involves a pump, or a lot of buckets. But now it seems water can do some of the heavy lifting itself.

Kesong Liu of Beihang University in Beijing, China, and his colleagues have developed a way to lift water with no need for an external source of energy. Although the technique only works over short distances at the moment, it could be useful for microfluidic lab-on-a-chip devices that shift small amounts of water around to analyse diseases.

Key to the technique is a copper mesh treated with an alkali solution to create microscopic pockets on its surface, making it water-repellent, or superhydrophobic. The team placed this mesh at the bottom of a vertical plastic pipe with a right-angle joint at the top, which was filled with a small amount of water.

The superhydrophobic mesh repels the water and stops it from falling, but doesn’t transport it upwards. That happens when a small droplet of water is placed underneath the mesh and gets drawn into the column above, causing the top of the column to rise slightly. Once enough water has been lifted to fill the pipe, it spills out the other end (see video).

It may seem like magic, but it’s all thanks to the surface tension of water. When the droplet touches the larger column of water, this surface tension breaks and the energy used to keep the droplet spherical goes into lifting the water. «We thought, why not use water’s own energy to propel the antigravity delivery?» says Liu.

The antigravity device can only lift a water column about 1 centimetre tall at most – beyond that, gravity begins to win out over the water’s own energy. But Liu thinks this could still prove useful. «We believe that the current finding and design should offer great opportunity to develop advanced microfluidic devices,» he says.